Natural wax is, chemically, “an organically-synthesized hydrocarbon generally composed of long alkyl chains with various other molecules such as fatty acids, esters, alcohols, and aromatic components.”  Okay, sure.  But what is wax?

Waxes are characterized as much by their properties as by their exact chemical composition.  Generally, waxes are hydrophobic (water-repellent), lipophilic (fat-loving), solid at most ambient temperatures, but malleable and with a low melting point.

Natural waxes are “organically-synthesized,” meaning that every wax found in nature was originally made in the body of a living creature.

This includes the so-called “mineral waxes”: ozokerite (and its derivative, ceresine), and montan wax, both of which are found in association with lignite (coal).  Paraffin wax and microcrystalline wax are derived from petroleum.  Both coal and petroleum are the result of the organic matter that is subjected to heat and pressure over a long (long) period of time. 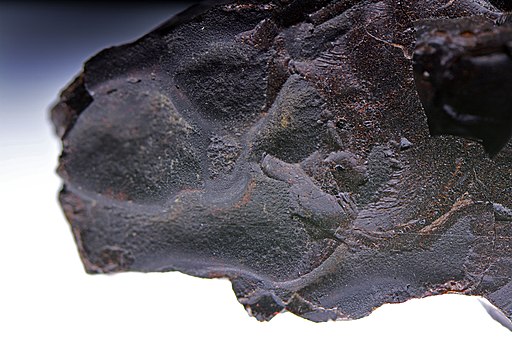 Photo credit: Ozokerite, from the collection of the Natural History Museum of Lille, courtesy of Wikimedia Commons

A large number of plants and animals (including insects) make wax, and put it to a variety of uses.  Human beings are no exception.

Which bring us to our first question: What is a property of wax that humans make use of, that is not found elsewhere in nature?

Well, let’s look at the properties one by one.

The hydrophobic (water-repelling) nature of wax is by far its most widely-used property. Sheep produce lanolin (also called “wool wax” or “wool grease”) to waterproof their fleece (it also has antimicrobial properties).  Plants that produce wax usually do so as a means of preventing moisture loss from their leaves.  Similarly, people use the wax produced by other plants and animals as an emollient to “waterproof” their own skin, by including it in products like salves and lip balms.

Interestingly, lanolin is particularly prized for this use, as it closely resembles the compounds produced by the human body for the same purpose.  However, lanolin in its natural state is mixed with compounds that can cause allergic reactions.  Here is a brief but informative article about using using lanolin on your skin..

And here is one of the better (among the hundreds) of books about how make your own cosmetic products from wax:

Wax is also one the preferred ingredients in wood polishes, which act as waterproofing for wood.  Wax polishes have been around for centuries (at least) and are relatively easy to make. Here’s time-honored recipe that has been around with only slight variations for hundreds of years:

Melt one pound of beeswax in a double boiler (never, EVER melt wax over an open flame!).  Add one pint of gum turpentine and remove the mixture from the heat, stirring constantly while it cools.  Pour the mixture into a wide-mouth container before it fully hardens, and cover it with an air-tight lid.  Apply the wax to furniture with a soft cloth.  Allow the solvent (turpentine) to evaporate, then polish with a clean cloth.

Both lac bugs and honeybees use wax to construct waterproof protective structures for their larvae.  Humans use wax to waterproof fabric such as canvas sails and raingear.  They also use it to create my favorite textile art, batik.

Let’s take a look at another fascinating property of wax.

Solid but malleable at room temperature, with a low melting point.

Humans use this property for things like the art of lost wax casting.  In this technique, wax is sculpted into a form that is used to make a mold, and then the wax is melted away; the hollow mold is then used to cast molten metal (often bronze).

Here’s a book, in case you’re interested in learning more about it:

Though the function of spermaceti in a sperm whale’s body is poorly understood, the two main competing theories both rely on the wax’s low melting point, which keeps it liquid at the whale’s internal body temperature.  One theory holds that the waxy substance acts as a buoyancy regulator, with the sperm whale able to control the liquidity (and thus the density) of the wax.  The more widely accepted theory is that the spermaceti assists the whale in echolocation.  Either way, something is important enough about spermaceti that a large whale has roughly 500 gallons of it in the spermaceti organ (located at the front part of the head) at any given time.

It’s hard to compete with the coolness of echolocation, but we’re going to give it a try by looking at encaustic painting.  This art form has been around since at least the first century A.D. in Egypt, where it was used to paint “mummy portraits,” or portraits of the dead.  This painting technique uses molten wax mixed with pigment, and is known for enabling rich, textured and luminous color.

Here’s a book, in case you’re interested in learning more about this time-honored art form.

Ah-hah!  I think we might have found a property that only humans use.  At least, I can’t think of any other living creature that purposefully sets things on fire — though I would love to know if there is one.

These days, candles are almost entirely decorative, but it wasn’t so long ago that they served the critical purpose of prolonging the hours in which a person could be productive.

All waxes, which are composed primarily of hydrocarbons (in the form of wax esters), are flammable, though some are better for that purpose than others.  Of the “big four” most commercially important waxes (carnauba wax, candellila wax, beeswax, and paraffin), only beeswax and paraffin are widely used for their flammability.  Though one exception is bayberry wax, which forms a coating on the fruit of the bayberry tree (a.k.a. the wax-myrtle or candle tree, Myrica cerifera) and is used to make the sweet-smelling bayberry candles.

So, now we have at least one property of wax that only humans typically use.  But that’s not the end of our exploration of the wonderful world of wax.

Next question: How much wax does the average American consume on a daily basis?

You’re trying to remember the last time you stuck a chunk of wax in your mouth, aren’t you?  You’re thinking, Who eats wax?  Nobody eats wax, unless there’s some wax-eating health food craze, right?

Well, let me put it this way: Think about the last time you ate a nice, shiny apple from the grocery store, or an M&M candy, or a bar of chocolate; the last time you swallowed a pill or used a baking mix or chewed a piece of gum…Chances are, you are eating wax every day, whether you know it or not.  So, how much wax?

To get an idea, let’s take a look at the most widely used food-grade wax in the world.  Carnauba wax (also called Brazil wax, or “the Queen of Waxes”) is extracted from the leaves of the carnauba palm (Copernicia prunifera).  In food products, the wax is used as a glazing agent, a body or mass agent (to add bulk), an acidity regulator, and an anticaking agent.

Here’s a sample of the recommendations of the CODEX Alimentarius (a collection of internationally recognized standards, codes of practice, guidelines, and other recommendations relating to foods, food production, and food safety) regarding limits on how much carnauba wax can be included in food products:

So, in things like chocolate and dietary supplements, it’s generally recognized that up to .5% of the food can be wax. According to these guidelines, if you eat, say, one chocolate bar five days a week for a year, about one and a quarter of those bars that year is pure wax.  If you eat an apple every day for a year, you eat the equivalent of about one apple slice’s worth of wax.

However, in the United States, the FDA has categorized carnauba wax as “Generally Recognized as Safe” and there are no specific limits in place as to how much carnauba wax can be included in food.

Nutritionally, the wax is inert — which is why it is so widely used.  Our body does not metabolize it, and it is hypoallergenic.  So, it’s not doing you any harm, but it’s also not doing you any particular good.  Carnauba as a food additive is mostly just there for show — and it’s a fair amount of show.

And that’s just carnauba wax.  Paraffin wax is produced in enormous quantities, and put to very similar uses in food.

Think about that, next time someone asks you a silly question about how much wax you’ve eaten lately.

Next question: What the heck?

There’s one more use of wax that we haven’t talked about yet, that I’m willing to bet is not on your radar: Ceromancy (or carromancy) is the practice of divination by pouring liquid wax into water and interpreting the shapes formed, with the aim of foretelling the future.

You might think this practice (along with the many other forms of “-mancy” out there) is just fanciful nonsense, relegated to the realm of superstition and “people who don’t know any better.”  But look a little deeper, and you’ll find a principle that unites humans in their never-ending quest for knowledge about the natural world.  It’s the idea that there are mysterious and complex forces at work in the universe — mysterious and complex, but not unpredictable.  There is an assumption at work here, that there are definite “rules,” and if we could only gain some insight into how they work, we would be able to “see the future” — that is, make predictions about what is going to happen, based on an understanding of how the world works.  That is exactly the foundational axiom of the scientific method: That the laws of nature are complex, but not unknowable, and not random or changeable.  It’s a pretty big assumption, when you stop to think about it.

Luckily for us, and so far at least, it seems to be true.  Our quest for knowledge is not for nothing: when we wake up tomorrow, the universe will likely be operating according to the same rules as it was when we went to sleep the night before.  That’s comforting, isn’t it?

When the human world feels chaotic and unpredictable and overwhelming, it’s nice to look around us at the bigger picture and know that the natural world is build on a rock solid foundation, governed by laws that are the same yesterday, today, and tomorrow.  And are, within at least an important (if not infinite) range, knowable.

Isn’t that so totally awesome?